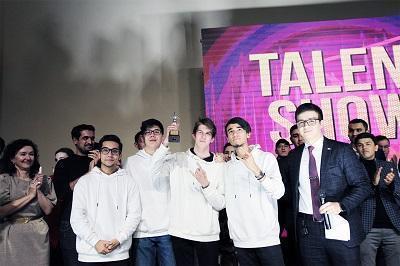 The 2019 edition of Westminster International University in Tashkent’s “Talent Show” once again gave the opportunity to the university’s most talented students to showcase their skills. Contestants in the large-scale charity concert wowed the audience with their energy, youth, and creative potential, making the evening truly unforgettable.

Every year, the "Talent Show" participants undergo a rigorous selection process, during which the university most talented compete for the chance to perform live at the event. This year, over 40 of the university’s most talented students were selected to participate in the competition. The audience was regaled with a variety of performances, which included solo performances, virtuoso dances, and Juliet's monologue, as well as a hilarious stand-up set by the new KVN team.

The winners were as follows:

As a socially responsible university, WIUT conducts charity work through the organization of social and cultural events. The proceeds from the Talent Show will be used to help low-income families.